Agnes Mae Hostetler of East Lansing, MI, passed away on Sunday, July 7, 2019 at age 88. Mae was born in Lansing, MI, on January 31, 1931 to Joseph and Agnes (Murray) McMahon, both of whom emigrated to the United States from Ireland.

Mae, who was very proud of her Irish heritage, grew up in the Lansing area and was a graduate of Resurrection High School. She married Robert James Hostetler on September 27, 1952. Theirs was a long (57 years) and happy marriage that produced two sons and a daughter. Because of Bob’s naval service and subsequent aerospace engineering career, they lived in various locations in the United States and abroad, including Guam, Kansas, Indiana and Florida, before eventually returning to Michigan in 1966.

Mae was predeceased by her husband Bob as well as her parents and three sisters, Patricia Hidlay, Dee Thomas, and Eileen Christensen Fortino.

She is survived by her daughter, Lori Hostetler (Michael Petersen) of East Lansing; and sons, Dr. Mark Hostetler (Alicia) of DeWitt and Dr. Robert Hostetler (Nancy) of Okemos. She was a devoted grandmother to Ben, Michael, Alex and Stephen Hostetler, and Sarah Hostetler Sanders (Charles), who also survive her. She is also survived by two brothers, James McMahon and Dr. Joseph McMahon (Marilyn), all from East Lansing, and by her very close friend, Karen Miller. She leaves behind many nieces, nephews, cousins and dear friends to mourn her loss.

Prior to retiring in East Lansing, Mae and Bob lived for many years in Ann Arbor,
where Mae was employed by the University of Michigan. While there, she and her husband were founding members of the Gourmet Club, a dinner group of friends that gathered monthly for more than 40 years. They also enjoyed travel, visiting locations throughout the United States as well as international destinations including Spain and Ireland, among others.

Mae loved to entertain, she was an excellent cook (no Thanksgiving gathering was complete without her wonderful pecan pies), an avid card player, and a relentless knitter, who presented family members with new hand-knit slippers every Christmas.

Mae was a gifted artist who was a member of the Chelsea Painters for well over 20 years. Mae’s watercolor paintings of flowers and landscapes reflected her love of nature. She used subtle glazes of warm and cool color to breathe life into the foliage and scenery of her paintings.

Her gentle touch and her reverence for nature was evident in her oil mono-types, as well. Mae reconnected with her past painting medium of oil when she discovered the wonderful effects of oil monotypes using water based oils. 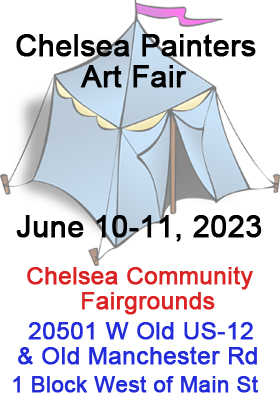